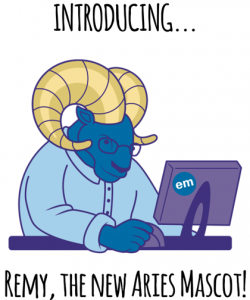 Aries Systems was founded in 1986 by Lyndon S. Holmes and his wife, Sandy Holmes. Lyndon chose to name the company in honor of Sandy’s astrological sign, Aries.

Fast-forward to 2019, the Aries team is brainstorming ideas for a fun visual representation of the company. Among a few whimsical suggestions from Aries staff (narwhal, anyone?) was also the idea of a ram, the universal symbol of the Aries zodiac and constellation.

The new Aries mascot made its debut at the Editorial Manager User Group Meeting in June 2019. We encouraged the attendees in the audience to participate in our online poll to submit and vote on name suggestions for the ram. We received dozens of name ideas (with Reginald Remington III and Jean Claude van Ram as crowd pleasers), but ultimately decided on Remy.

Look to the Aries Instagram to watch our highlight story that features behind-the-scenes insights into the initial concepts and drawings on Remy’s creation. You may see Remy in the future through fun social media posts and on Aries-branded items at upcoming industry conferences and events.

We are excited to introduce Remy the Ram as a member of the Aries family and pay homage to the roots of our company.