For this month’s Aries staff interview, we sat down with Lon Hildreth, Senior Software Engineer. Read our interview with Lon to learn more about his instrumental role in the development of Editorial Manager from inception to present during his 25-year tenure at Aries. 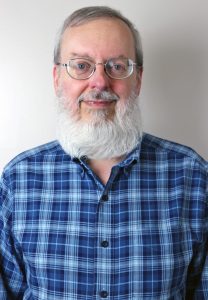 Tell us a little about yourself – how long have you been working for Aries? What did you do before joining Aries?

I’ll hit my 25th anniversary at Aries in February 2020. I’ve been a professional software engineer for 39 years. I started at Burroughs (remember them?) working on “the office of the future”, networked workstations that handled text, graphics, and voice data with a suite of 15 applications. Pretty radical for the early 1980s. Unfortunately, that project got canceled and I soon found myself at Timex working on the Timex/Sinclair 2068, writing operating system code in Z80 assembler. A few other jobs followed prior to Aries. When I took this job, I thought that I had better stay here a while because my previous two jobs were of fairly short duration and it wouldn’t look good on my resume to have three short jobs in a row. I think I succeeded in that goal!

What have your roles at Aries been?

Back in 1995, my first project was to put the New England Journal of Medicine on CD-ROM. I wrote an application that would convert the electronic files we got from them into a format that could be built into a Knowledge Finder® database. Tables, graphics, and photos, however, needed to be scanned from the printed journal. We had two people (later four) doing the scanning full-time. One of those people is still with Aries (Amy Burke in QA). Knowledge Finder, Aries’ original product, was a program originally written by Aries founder Lyndon Holmes that provided fuzzy logic searching of Medline®. With some relatively small changes, it was made to support full-text databases. I added some code to enable it to display tables and images. Ultimately, we were producing 17 full-text CD-ROM products some of which had content from multiple journals, one being a textbook (Tindall’s Practice of Neurosurgery). We got data in a variety of formats and I wrote software to translate all of them. Some journals did not give us data files, so in those cases, we sent the print journals to a company in the Philippines and they sent us electronic files in a suitable format for our build program. I was the technical contact for that and got very proficient at using the FAX machine to communicate with them.

In the meantime, Knowledge Web was created. This was a web-based version of Knowledge Finder to search Medline. I created a way to customize the look of the output based on the user login. This allowed us to sell the Medline search service to several dozens of sites during the initial dot com boom (such as MedScape, MD Choice, and Web MD) and have it look like it was part of their site. I worked with many of these customers to perfect their pages.

I started work on our current flagship workflow solution, Editorial Manager, in 2000. Lyndon had met a gentleman named Larry Gauthier who had a desktop application called Editorial Assistant. Many of his customers were urging him to make a web version of Editorial Assistant, but it was a side business for him and he didn’t have the resources to take that on. So, he struck a deal with Aries and consulted with us for two years. I created a demo website and the three of us went to Raleigh, NC to show it to the editorial staff of the Journal of Bone and Mineral Research. They gave us incredible feedback and I learned so much about how a journal operates, which was a huge help in creating something that would actually be useful.

For three or four months I worked solo on developing Editorial Manager. Another Aries software engineer was then brought on to handle the building of PDF files. The Journal of Thoracic and Cardiovascular Surgery was the first journal to go live on version 1.0 and we got a lot of great feedback from them, too. In those first few months, I had a fair amount of direct contact with customers, so we soon created the Account Coordinator position to handle that customer interaction. It wasn’t too long before we hired Tony Alves as Product Manager to bring some order to what had become a fairly chaotic process.

How have your previous roles helped you in your current position?

It’s all a continuum. You learn things along the way that are helpful in the future. Technology changes, but the basic principles remain the same.

How do you stay up-to-date with customer needs?

These days it’s primarily through specifications written by Product Management.

Tell me about your department and the people you work most closely with.

The Engineering department currently consists of five teams, consisting of a Team Lead and generally three other software engineers. The engineers on my team have all been with Aries more than five years. That’s unusual in the industry, but not for Aries. In fact, several engineers have been here for more than 10 years!

I generally spend anywhere from 50% to 80% of my time implementing a specification for a new feature or working on bug fixes. The rest of my time is spent doing code reviews for my team or other Team Leads (all code gets reviewed), helping out my team (and sometimes other teams) when they encounter problems, attending meetings, and handling email.

What do you most enjoy about your job?

One satisfying aspect of software development is making something out of nothing. I’m amazed when I think about how Editorial Manager didn’t exist and then I wrote some code and look at it now!

What are you currently reading, listening to, or watching?

I’m reading Dreyer’s English by Benjamin Dreyer. Believe it or not, it is a highly entertaining book on the use of the English language.

I listen to a lot of podcasts. I don’t have enough time to listen to them all, so some just fade away as new podcasts catch my interest. But three that I have listened to every episode of since 2006 are This Week in Tech (TWiT), MacBreak Weekly, and Harry Shearer’s Le Show. In addition, there are three short daily podcasts that I use to keep up with breaking tech news: Daily Tech Headlines, Techmeme Ride Home, and Mac OS Ken.

Music-wise, I listen to a lot of classic rock, especially The Beatles. I’ve enjoyed the recent 50th anniversary releases.

There’s been an explosion in quality television in recent years. So much so that I don’t see too many movies anymore. Although I did recently see the documentary WBCN and the American Revolution about the early years of the legendary Boston radio station. It is really good and I think that even if you never listened to the station, you’ll find the movie very interesting.

My all-time favorite TV show is The Sopranos. I’ve been watching HBO or Showtime almost every Sunday night ever since. My current favorites, both in the final seasons, are Silicon Valley and Shameless. Silicon Valley is a rare Hollywood production that gets tech right.

Tell me about some of your hobbies/interests outside of work?

I love craft beer. My favorite beer is one I haven’t had before. Often on a weekend, I’ll venture to a brewery taproom I haven’t been to before. You can follow my beer adventures on untapped.com or the Untappd app where I rate all the new beers I try.

In the last few years, I’ve been attending more concerts, comedy shows, and talks with the thought that this may be my last chance to see these performers. Among those I’ve seen recently are Paul McCartney, The Who, Tom Petty, Paul Simon, Joan Baez, Neil Young, Buddy Guy, Elton John, The Eagles, U2, Al Pacino, Mel Brooks, John Cleese, Eric Idle, Bob Newhart, and Jerry Seinfeld.